The first day of legal retail cannabis sales in New Jersey went off without a hitch on April 21st, with no shortages or patient access issues, according to the Garden State’s Cannabis Regulatory Commission.

In a post on Tuesday, the CRC stated that long lines were reported at some of the 12 adult-use dispensaries in the state, but they only received a few minor complaints.

As retail sales began last Thursday, New Jersey Governor Phil Murphy tweeted that the launch of adult-use cannabis sales “is the start of an entirely new industry for our state, and a historic moment in our work to advance social and economic justice.”

Later in the day, Governor Murphy tweeted a video shot outside the Zen Leaf dispensary in Elizabeth, New Jersey. He stated, “this is an incredibly important day for New Jersey.”

He added that New Jersey reached this new era of legalization “because of social justice, and the need to undo the damage from the overwhelming War on Drugs and all the lives that were ruined as a result of that. This is one step, it's not the final step, but it's one huge step in the right direction.”

Murphy said that the state’s adult-use recreational cannabis market “will serve as a model for the entire nation in ensuring racial, social, and economic equity and justice.” 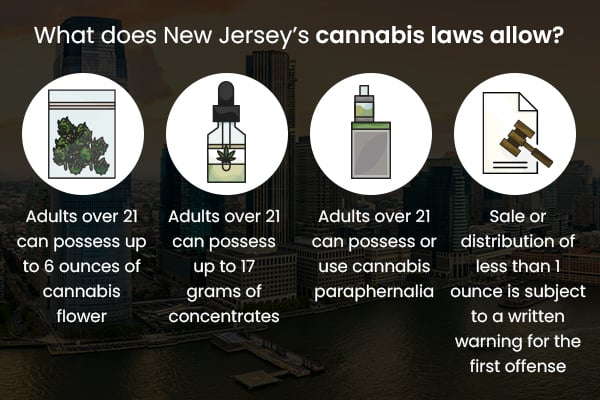 In November 2020, New Jersey voters approved a constitutional amendment to legalize marijuana in the state. In February 2021, Governor Murphy signed into law two cannabis reform bills. These include A21 – “The New Jersey Cannabis Regulatory, Enforcement Assistance, and Marketplace Modernization Act,” which legalized cannabis use and possession for adults over 21 and established a regulated cannabis market. Murphy also signed S3454, which clarifies the penalties for cannabis use and obsession for people under 21.

Not quite the edibles you’re expecting

An interesting aspect of the bill is that it doesn’t allow edibles that resemble food. For an “ingestible product” to be legally sold in New Jersey, it must be “used in a way that renders it unrecognizable in the final ingestible product.”

Ingestible products are also not allowed to be in the shape of “a realistic or fictional human, animal, or fruit, or part thereof, including artistic, caricature, or cartoon renderings.”

Correcting the “failed War on Drugs”

“The failed War on Drugs has systematically targeted people of color and the poor, disproportionately impacting Black and Brown communities and hurting families in New Jersey and across our nation,” U.S Senator for New Jersey Cory Booker said upon signing of the bill.

“Today is a historic day, and I applaud Governor Murphy, the legislature, and the many advocates for racial and social justice whose leadership is ensuring that New Jersey is at the forefront of equitable marijuana legalization policy.”

The state had already missed several deadlines in the program's rollout, though the timeframe is consistent with other states that have legalized adult-use cannabis. There has also been some concern that black-owned businesses in New Jersey will be left out of the legal cannabis market in New Jersey. The law requires that 30% of recreational marijuana licenses be awarded to businesses owned by women, minorities or disabled veterans.

Soaring ahead of New York (for now)

Next door in New York, then-Governor Andrew Cuomo legalized cannabis by signing the Marihuana Regulation and Taxation Act (MRTA) on March 31, 2021. The law allows adults over 21 to possess up to three ounces of cannabis flower and 24 grams of concentrates. It allows the cultivation of up to three mature and three immature marijuana plants.

A year later, legal cannabis retail stores have yet to open in the Empire State.

But for New Jersey, the windfall for legal cannabis goes far beyond just beating New York to the finish line.